For those of us on the Greater Portland Inc. Sept. 27-30 Best Management Practices tour choosing the Regent Park Revitalization, doubtless, the most animated and enthusiastic speaker we encountered on the trip was Mitchell Kosny.  Kosny is Associate Director of the Ryerson University School of Urban and Regional Planning and a former Chair of the Board of Directors at Toronto Community Housing Corporation during the ‘roll-out’ of Regent Park revitalization.  Unfortunately, Dr. Kosny may not have realized two things: 1) We had spent the earlier part of the day sitting in meetings and were ready for a tour; 2) We were from the Pacific Northwest and therefore comfortable with rain.  I knew Regent Park to be just a few blocks down the street from Ryerson.  So, after nearly an hour sitting in Dr. Kosny’s PowerPoint lecture when he expressed doubt about doing a tour in the rain, , , I set off on my own tour.

Regent Park is directly east of Ryerson University and very close to the rest of downtown. Image courtesy of UoT student paper: http://www.torontohousing.ca/webfm_send/11574 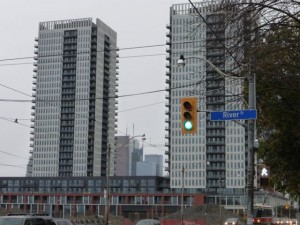 Regent Park identical towers. One is market rate, one is subsidized. Photo by PlanGreen

Regent Park is being redeveloped in five phases with three of those phases currently underway. A key tenet of the revitalization is including both rent-geared-to-income and market rate units together in the same community. I could guess which was the market rate building because I was there at rush hour when a number of young people were coming home from work and others were leaving to walk their dogs.

When the Regent Park revitalization is completed over the next 10 to 15 years, 12,500 people will live in 5,115 units across 69 acres of the largest publicly funded community in Canada. The plan includes the replacement of the 2,083 existing social housing units in Regent Park with new, energy efficient, modern units and the introduction of approximately 3,000 market units for sale. 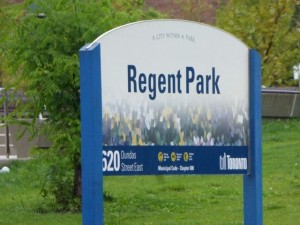 Regent Park is both the name of a park and a neighborhood that is re-branding itself. The park is separate from the athletic fields, but does have a community garden at one edge and an aquatic center at another. Photo by PlanGreen

I was happy to see that Regent Park actually has a park!  It’s a large park that is separate from the athletic fields that are currently under construction.  There’s a separate dog park too!  A community garden at one edge of the park is the front yard of many people who live in high rise housing. 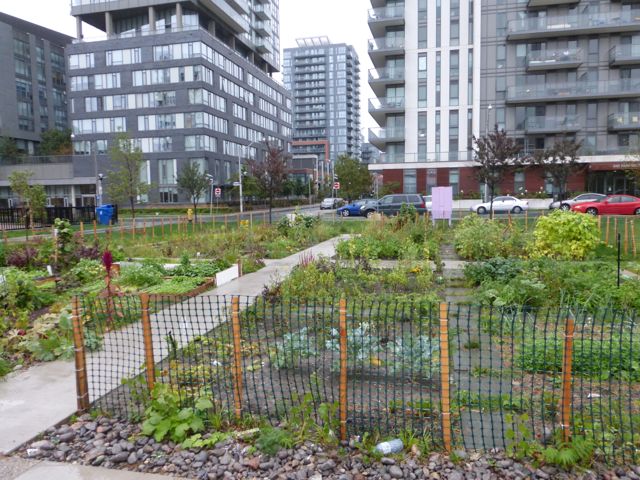 A community garden at one edge of Regent Park is close to much high density housing. Photo by PlanGreen

The architecture of the new buildings is a departure from the red brick of social housing projects.  Although there are some townhouses too, I was a bit surprised by the focus on high-rise housing, considering the bad rep that got with Cabrini Green and Pruitt Igo iin the US. However, Toronto seems to have a long history of housing its poor in high rise housing,.  Another question I have about high rises has to do with resiliency.  Considering the era of increasing natural disasters we are in, most high rises will fare very poorly without power for even a week or two. With Toronto’s mandatory Green Roof Bylaw and its Green Standards policy, its new high rises may be in better shape than most to weather power outages.

The revitalization also reconnects Regent Park to Toronto’s grid of streets and avenues, and includes the creation of new commercial spaces and community facilities including a bank, grocery store, aquatic center, new community center, restaurant and an arts & cultural center. 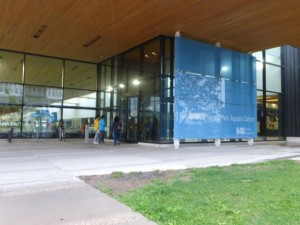 Regent Park Aquatic Center is a regional swim center that brings in folks from other neighborhoods too. Photo by PlanGreen

Regent Park Aquatic Center serves people from other neighborhoods as well. I spoke to a man from Leslieville neighborhood who was waiting in the park for his daughter who was using the swimming pool. 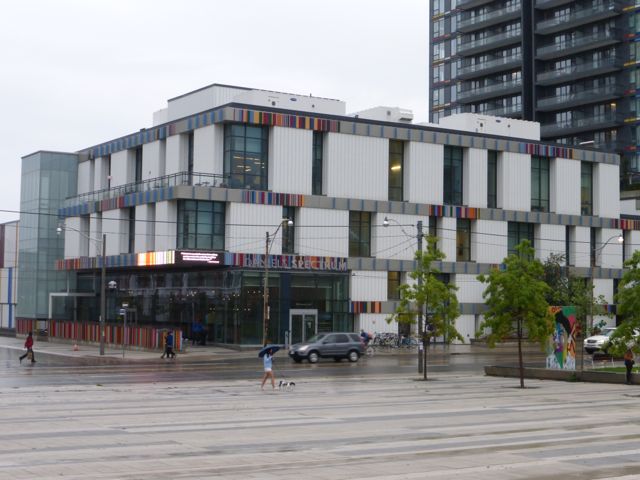 The Arts and Culture Centre with Paint Box condominiums atop it. is the center point of the cultural regeneration of the neighborhood. This 60,000 sf facility is home to seven arts and innovation non-profit organizations. Yes, intersections are often too wide to be truly comfortable to the pedestrian in Toronto. Photo by PlanGreen

The Arts and Culture Centre known officially  as Daniels Spectrum is seen as a center point of the neighborhood. (Daniels Corporation is the development company that partnered with Toronto Community Housing to build all five phases so they got naming rights to this key facility!)  This 60,000 square foot facility is home to seven arts and innovation non-profit organizations. As we have seen in the U.S., the arts can offer an exciting career path to children from all income classes so I see this center as vital to the revitalization efforts.  I saw lots of people coming and going during my brief observation. 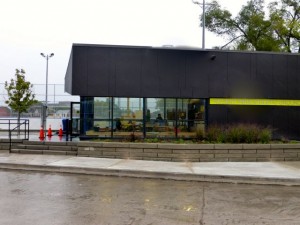 Phase 3 is progressing with the development of the athletic fields and the addition of pedestrian-friendly streets connecting to other neighborhoods. Planners believed that because of its enclave-like street design, residents were cut off from the city, even though they lived a short streetcar ride from some of its most affluent neighbourhoods and greatest cultural attractions. More social and market housing  is also part of phase 3– with completion estimated to be 2018 . 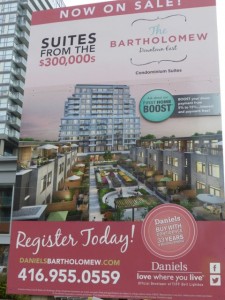 A Daniels ad for The Bartholomew condominium community–a mix of high rise and row houses. Photo by PlanGreen

It bears repeating that a key tenet of the revitalization is including both subsidized and market rate units – together in the same community. Townhouse as well as high rise; rental as well as ownership opportunities are available.  This sign advertises suites from the $300.000s but I also saw from the $200,000s.

Another key tenet is access to employment.  Regent Park residents can get one-on-one help with job searching, local employment opportunities, career planning, education and training, and more.  The Regent Park Employment Plan has an ambitious agenda.

These are typical units in the old social housing. Photo by PlanGreen 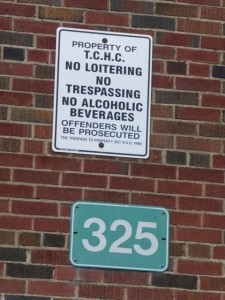 This “No Loitering No Trespassing No Alcoholic Beverages sign hints at old problems the community is trying to overcome.  The sign also reminded me  that Regent Park had become synonymous with poverty, crime and unemployment. Photo by PlanGreen

Never one to avoid a challenge, I also spent some time exploring the older parts of Regent Park that have not yet been demolished.  I’m not sure during which phase this seemingly vacant building will come down–and with the rain, there was no one around to ask.  Any tenants who have to move because of construction get one year’s notice before demolition and five months’ notice before they have to move.

While Toronto’s version of the U.S. Hope VI program is impressive, like its counterpart in Portland, New Columbia, it has not solved all its problems.  There had been three fatal shootings in the neighborhood in 2010 that left even Regent Park’s supporters in doubt. TCHC maintains that by incorporating crime prevention best practices into the design of the buildings and public areas and by linking tenants to jobs and training opportunities, it is improving community safety.

In his talk, Dr. Kosny spoke about the green that is not seen.  One of those unseen aspects seems to be what Margaret Wente in The Globe and Mail calls “the most successful “normalization” project ever launched in Regent Park”:

. . . an all-encompassing program called Pathways to Education, which mentors and coaches secondary-school kids through graduation and beyond, and guarantees them a bursary if they graduate. (A big advantage, in my view, is that Regent Park has no secondary school, so the kids have no choice but to venture outside the ’hood.) Pathways connects them with the world and shows them how to navigate it. 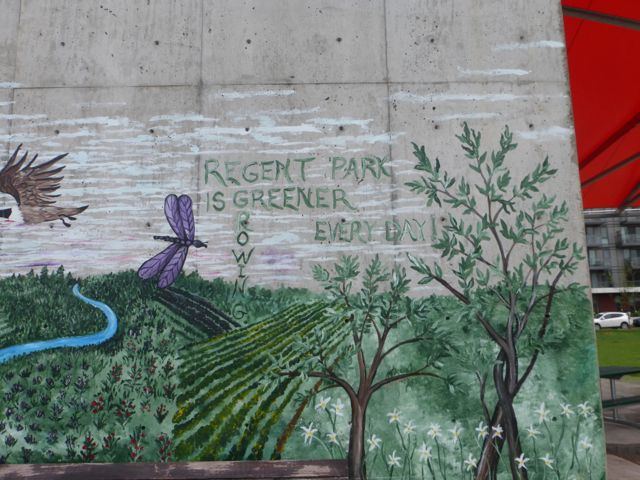 Regent Park Is Growing Greener Every Day reads this sign near the community garden. Photo by PlanGreen

Toronto-based journalist, Doug Saunders, in his book, The Arrival City, points to three things that are crucial for integrating immigrants into the middle class:  education, transportation and access to jobs.  Time will tell if Regent Park is doing all three well.  At the end of 2015, it appears to be headed in the right direction.