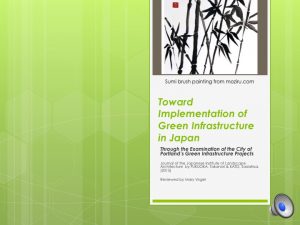 In this presentation I review the paper “Toward Implementation of Green Infrastructure in Japan Through the Examination of the City of Portland’s Green Infrastructure Projects” by Takanori Fukuoka and Sadahisa Kato. I add to the authors’ three recommendations with three recommendations of my own based upon my knowledge of Portland’s green infrastructure. The paper was originally published in the Journal of the Japanese Institute of Landscape Architecture. 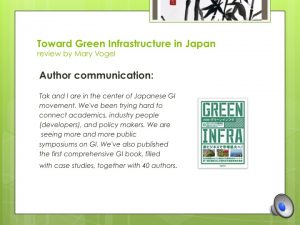 Dr. Vivek Shandas and I received an email from Sadahisa Kato that read: “Tak and I are in the center of the Japanese GI movement. We’ve been trying hard to connect academics, industry people (developers), and policy makers. We are seeing more and more public symposiums on GI. We’ve also published the first comprehensive GI book, filled with case studies– together with 40 authors. Fukuoka and Kato first set the historical context by examining some of the federal and local events that led Portland to undertake such a wide-ranging green infrastructure program. The history included the federal Clean Water Act of 1972, the development of US Environmental Protection Agency’s Low Impact Development program in the 90’s, and EPA’s Innovative Wet Weather Grants in 2005. At the local level, the history included the Combined Sewer Overflow lawsuit in 1991, the creation of Bureau of Environmental Services Sustainable Stormwater Division in 2002, Water Quality Friendly Streets in 2003, the Watershed Management Plan in 2006 and the Grey to Green Initiative in 2008. They do not list the National Invasive Species Act of 1973 nor the listing of various species of salmon in 1998 that were further impetus for Portland’s program. 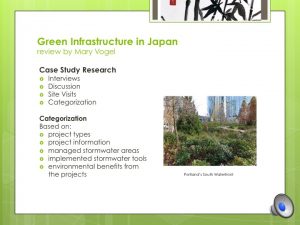 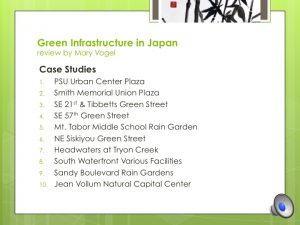 The ten sites Fukuoka and Kato categorized based upon the previously mentioned criteria are viewable in the above list.  This is a good mix of relatively old and new facilities of various types. 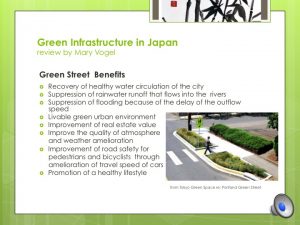 The green street benefits the authors chose to emphasize are viewable above. 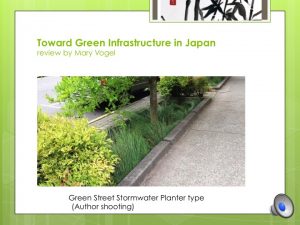 This is one of three photos included in the paper: a flow-through planter at the west edge of the PSU campus. The plant in the foreground (lower left corner) is Nandina (aka Heavenly bamboo). When I first returned to Portland in 2007, the City had been planting it in nearly all GS facilities. I asked them over and over again to STOP this practice as the plant is invasive from Washington, DC to Florida—and possibly soon here. I haven’t seen any recent GS plantings of Nandina by the City, so someone may have listened. 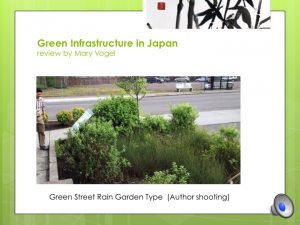 This rain garden green street facility is set back from the street in a location that had empty space because of the street configuration. Rain gardens often add a park-like quality to these leftover spaces—in addition to filtering stormwater. 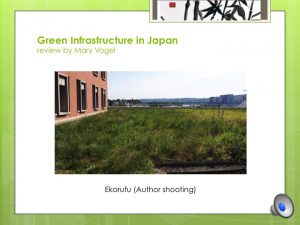 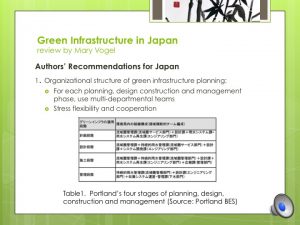 Fukuoka and Kato Recommendation One for Japan: For each planning, design, construction and management phase:  1. Use multi-departmental teams AND 2. Stress flexibility and cooperation. 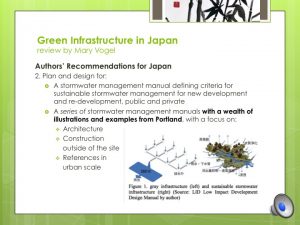 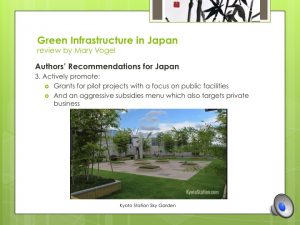 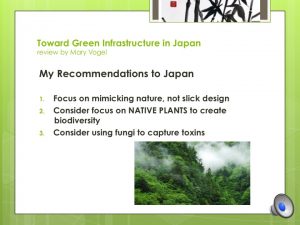 I first summarize my recommendations to Japan 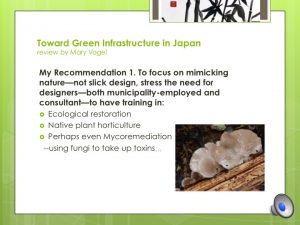 My Recommendation #1:  To focus on mimicking nature—not slick design, stress the need for designers—both municipality-employed and consultant—to have training in: ecological restoration; native plant horticulture and perhaps even a bonus for mycoremediation –using fungi to take up toxins…

Before today when most facilities are done in-house, Portland geared its Requests for Proposals to landscape architecture and civil engineering firms rather than ecological restoration firms when it sought consultants. The private sector still does.  The City’s in-house staff does not necessarily have such training either. 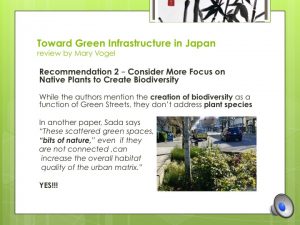 While the authors mention the creation of biodiversity as a function of Green Streets, they don’t address plant species—a vital part of creating biodiversity. In another paper, Sada says “These scattered green spaces, “bits of nature,” even if they are not connected, can increase the overall habitat quality of the urban matrix.”

YES! Green Streets CAN increase the overall habitat quality of the urban matrix, but only if they are designed to do so by professionals who know ecological restoration. I’ve been fighting for years to get Portland to use only NATIVE plant species. Native plants are the base of the food chain because the larvae of many native insects need native plants to develop. Insects are in turn the base of the food chain for birds and other native wildlife. This slide of a Green Street on East Burnside does show largely native plants. 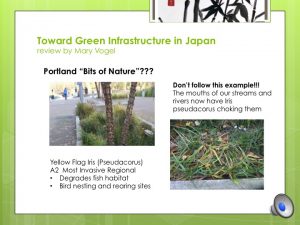 Yellow flag iris was first planted in the stormwater planters on the opposite side of the plaza from what’s shown here at South Waterfront—a private passageway, but subsidized and approved by the City of Portland. After much effort on my part over a couple of years, they were finally removed, but not before much damage was done. I recently discovered that they have volunteered in this planter across the way, so it’s still there. The sunny area in the background of the first slide is the Willamette River. With the river so close by, you can see why Iris pseudacorus has now shown up at the mouth of tributary streams like Tryon and Stevens Creeks and tributary rivers like the Clackamas and Tualatin Rivers. There it degrades fish habitat and bird nesting and rearing sites. 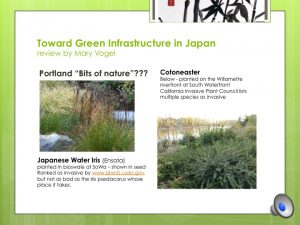 Portland now has Iris pseudacorus on its invasive list, BUT it lists Iris ensata as an alternative—a plant ranked as an invasive by USDA so it is NOT an appropriate alternative, even if not yet invasive in Oregon. Multiple species of Cotoneaster are listed as invasive by the California Invasive Plant Council. It seems irresponsible to approve the planting of ANY species of Cotoneaster (the plant in the foreground of the photo on the right) on a major flyway like the Willamette River. 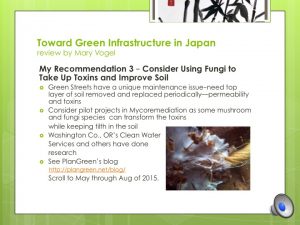 My Recommendation 3: Consider Using Fungi to Take Up Toxins and Improve Soil

Portland Green Streets currently need their top layer of soil removed and replaced periodically to stay permeable and also so that toxins they accumulate will not kill plants. Japan might consider some pilot projects in mycoremediation—as some mushroom and fungal species can both transform the toxins captured while keeping tilth in the soil. The photo shows fungal mycelia decomposing twine made of wood fibers. Those same mycelia can do a great job of decomposing polycyclic aromatic hydrocarbons and other toxins from motor vehicles as well—even heavy metals. I have written about mycoremediation research—including Washington County, Oregon’s Clean Water Services on my blog: PlanGreen.net/blog. Look for mycoremediation blogs from May 2015 to Aug 2015. 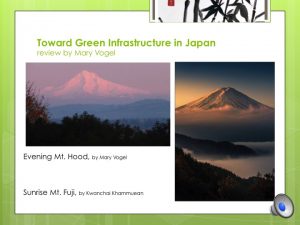 Portland has much that is great in its green infrastructure efforts. But many of its 1900+ Green Streets could do much better at increasing habitat and biodiversity through the use of native plants–and perhaps mycoremediation. It is my hope that Japan will show us how by putting biodiversity front and center in its GI program as both preserving biodiversity and installing/protecting green infrastructure are crucial to addressing climate change—and keeping snow on these two iconic peaks. I also hope that those students in Portland viewing this video will someday take over the bureaucracy and work to change the issues this presentation points out. 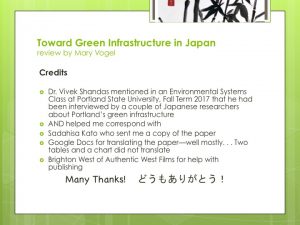