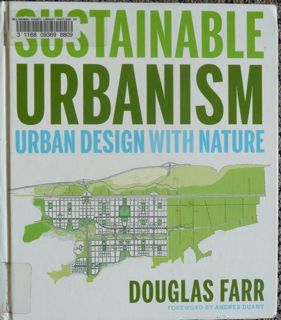 Having known Doug Farr, author of Sustainable Urbanism: Urban Design with Nature through participation in his LEED ND sessions at Congress for the New Urbanism congresses for 4-5 years, having followed him via the LEED ND Correspondence Committee, I thought I knew much of what Farr had to offer.  Make no mistake, I considered him a thought leader.  I helped to found a Sustainable Urbanism Ratings Group in Portland, Oregon to help Farr improve LEED ND.  I have espoused the 2030 Communities Campaign he founded both within CNU and in the larger world for the last two years now.

But it took hearing that there was a Biophilia chapter for me to push my local library to buy this rather expensive book.  After all, I have been prompting CNU designers to design utilizing ecosystem services for the 6-7 years that I have been active in CNU.  I needed to see who my soul mates are and connect with them.

Sustainable Urbanism integrated many threads that were sometimes divergent or confusing for me.  It gave me a better historical perspective and showed me where we are in a continuum.  As an underemployed planner, it gave me the assurance I need to believe that my skills will be needed well into the future.  It gave me a wealth of sound bites and quotes that I will use in my blog articles, public testimonies and other advocacy for progressive policy.  It reinvigorated the boldness that comes with certainty and reinforced my commitment to sustainable urbanism.

To begin with the basics, there were four parts to the book:

It was Farr’s own writing in Part One—and in a smattering of the headings in Parts Two and Three—that I found most insightful, most pithy and perhaps most controversial within New Urbanism.    For example, in Chapter 2 (p. 49) he states In order to strengthen human interdependence with natural systems, sustainable urbanism believes that human settlements need to be designed to make resource flows visible and experiential. . . Sustainable urbanism embraces the interweaving of riparian and wildlife corridors between and through neighborhoods.  In Chapter 8 (p. 169) he states Filtering stormwater, even in high-density urban locations, is an important aim of sustainable urbanism.

I loved Farr’s moments of unexpected optimism about the immense task ahead of turning around America’s development pattern.  For example, he writes regarding Gen X (p. 53)

As taxpaying voters presented with a bill for the full cost of the gloomy consequences of the prior generation’s wrong course on the built environment, they are also likely to embrace urbanism. . . .Given that this same pattern of land use that is cooking the planet is also contributing to the obesity epidemic, land-wasting low-density development, social isolation, heightened levels of pollution, higher taxes, and a shortened lifespan, it is hard to imagine that sustainable urbanism will not come to occupy the center of Gen X policy and governance.

After railing against land use laws that make LEED ND and sustainable urbanism illegal in many places, he offers this opinion (p. 59):

In light of the well-documented links between sprawl and the potential for shortened life spans, obesity, and accelerated threats to the Earth, a comprehensive plan that enables sprawl should, in the near future, run afoul of the law.  With a growing awareness of how auto-dependent land use can be hostile to human well-being, in just a few years sustainable urbanist plans may be the law of the land.

For me there were a couple of irritating aspects to the book as well.  While the lovely green color used throughout the book was aesthetically pleasing, when used in 6pt font, the light color made it difficult for me to read the timelines and sidebars interspersed through each chapter.  I also felt that many of the subchapters were too short to be satisfying.  Farr Associates own diagram on The Sustainable Corridor at the beginning of Chapter 6 Sustainable Corridors is crammed into a single page (p. 113) while the page next to it is mostly blank except for a chapter title–with adherence to style trumping readability.  And in Chapter 9, The 2030 Community Challenge: Economic Growth with Sustainable Urbanism p. 204 Farr says nothing about the economic growth one might anticipate from the title!

I found the chapter on Biophilia to be missing something—though it was partially offset by the subchapter on Biodiversity Corridors in Chapter 6.  But even that piece assumed that designers reading this book know the difference between using diverse native plant species and alien ornamentals to create a habitat patch.  For the most part they don’t.

Despite my complaints, I would still give this book five stars and recommend it highly to others in professions involving the built environment as well as community activists seeking to adapt their communities for climate change and peak oil.  After all, as Farr says in his Epilogue (p. 296) Sustainable urbanism, against enormous odds, requires the improbable: that the base of the pyramid—millions of us—“get it” and act in concert. . . What this book calls for is something that no one person can effect—a change in our political culture.

I am encouraged that the base of the pyramid may be waking up by reading that the citizens of Beaerton, OR are calling for a vibrant downtown to be created out of the sprawled array of car sales lots and disjointed strip commercial. “The City is looking for a consultant with international experience and acclaim in order to bring a cachet previously unseen in Beaverton that will excite the community to the possibilities of what the City may become in the future.”

This review was first posted as a review on Amazon.com.