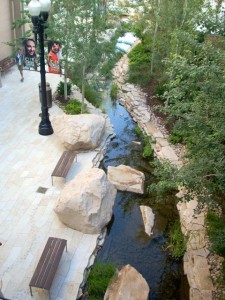 June 2013 – City Creek Center was started in 2003 by the real estate investment arm of the Latter Day Saints. The intent was to bring back Salt Lake City’s Main Street in a downtown that was losing out to the suburbs. It’s a mixed-use project that includes retail shops, office space and 435 condominiums and 110 apartments. No public subsidy was received so the project does not include “affordable housing.”

It’s also a green roof project in that its 90,000 square feet of plantings, courtyards, roof gardens and water features cover a 6000 space parking structure. What a waterproofing challenge! 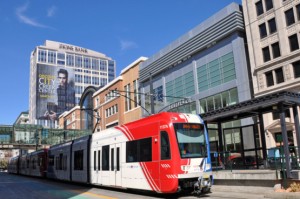 Both sides of the first Main Street TRAX stop are bordered by the Center. Photo courtesy of UTA.

“The things the LDS Church is doing with City Creek Center are going to be a positive boost to walkability and transit in Utah” according to “Faith in Action: Communities of Faith Bring Hope for the Planet,” a national report of the Sierra Club.  The Center brought more residents, employees, shoppers and diners to use the light rail system called TRAX.

Opening in 2012, with final touches added in 2013, this downtown revitalization project took 10 years to complete.  With development continuing throughout the crash in real estate, it was one of the only privately-funded projects of its size in the US that continued to build over the last few years. I happened to meet the Portland-based ZGF architect who was their project manager for the residential portion this week (at an event in Portland, first week of June 2013) and she confirmed how important this project was to her firm.  It also kept 2000 others employed throughout the development cycle and now employs over 7000 people.  It had about 16 million visitors in its first year of operation.

You can read more about the economic development aspects of City Creek Center elsewhere e.g., Salt Lake Tribune.  What I’m going to look at here is what role City Creek Center plays in putting Salt Lake City on the path to becoming the engine of biodiversity that Richard Louv exhorted CNU 21 attendees to work towards in our work. 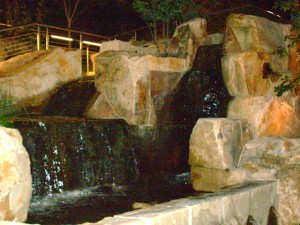 Although I’m not a fan of shopping centers, the creek kept me coming back day-after-day

City Creek Center was actually in the middle of my route to and from the Grand America Hotel where CNU21 was held from May 29 to June 1, 2013. Even though I’m NOT a fan of shopping centers, once I saw the creek there, I happily sauntered through it every day of my five-day stay.  It gave me a taste of what I was missing in the nearby canyons as I made my way to The Grand America each day.  The creek stimulated for me feelings of peacefulness—and a desire to get out into the real thing.

I recognized immediately the trees native to this area: Populus tremuloides – aspen; Betulae occidentalis – water birch; and Prunus virginiana – chokecherry. They were planted along a lovely creek that bubbled through boulders of native sandstone.  Below the canopy level, there were native sedges and rushes and shrubs– and a few plants I didn’t recognize as native. Tough non-native shrubs were brought in to overcome the trampling the natives were experiencing. 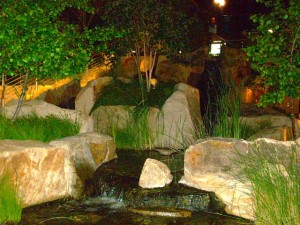 I appreciated the fact that the developers named this center after a natural feature that used to be there—AND that they made an extraordinary attempt to re-create that natural feature in their development. The creek flows across three city blocks, and drops 37 feet in elevation from beginning to end. Some 600 boulders were brought in from an area near Park City and 627 native trees from nurseries in Oregon and Idaho.

As it meanders along pedestrian walkways and cafes, the recreated creek features three waterfalls and a fountain with 50-foot-high jets. The creek varies in width from one foot to 28 feet and from four inches to 18 inches in depth.  Some parts of the creek were stocked with Bonneville cutthroat trout and rainbow trout and those fish are now reproducing.

A 17-foot waterfall at Regent Court cascades at 2,500 gallons per minute over 14 ton Utah sandstone boulders.  The landscape is actually comprised of 13 different water features that recirculate their potable water. According to Ross Nadeau, Landscape Architect project manager, “We looked at utilizing City Creek itself and then at the de-watering water from the site, but we couldn’t make either work because of the filtration costs.” 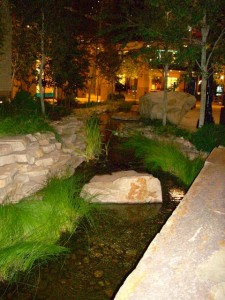 The creek serves as a draw for shoppers, employees and residents

City Creek Center received a LEED ND rating of Silver for its multiple efforts to be sustainable.  “The heart and namesake of our development is the re-creation of City Creek, which many years ago used to run through the downtown area of Salt Lake City,” said Val Fagre, former City Creek Reserve project manager—now retired. The craftsmanship put into building the creek is extraordinary.  And I can vouch that the creek serves as a draw for shoppers, employees and residents of City Creek Center. In the two times I ate at the Food Court there, I went to extra effort to sit near the creek. The Center also seems to attract plenty of young people to hang out on Friday and Saturday nights.

Nearby, City Creek Canyon has been protected from the beginning of the city’s history (over 150 years) to protect drinking water and wildlife habitat.  According to students in a class project in General Ecology at Westminster College:

By learning the names of the native trees and shrubs that support the wildlife in City Creek Canyon along the nature trail loop, one can see which plants may be useful in backyard landscaping. Native plants introduced into the urban landscape around houses and yards help wildlife to survive in the city and help conserve water.

Based upon the students’ observations (I didn’t get there), City Creek Canyon could qualify as an engine of biodiversity.  But could City Creek Center qualify? 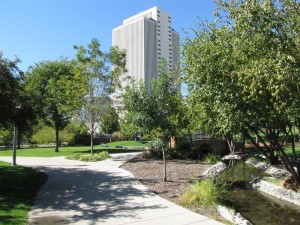 I missed the small signs that interpret the plants and fish of City Creek Center so it was not apparent to me how it was being used to influence further biodiversity–but the signage is there.  Does the experience of being in a pleasant environment lead people to go home and attempt to mimic what they saw while shopping or dining? Perhaps the center could be more proactive and run some “naturescaping” classes and host some native plant sales by local groups.  The project I would most like to see is for City Creek Preserve to work with the City’s Department of Parks and Public Lands to restore City Creek Park, to a more natural condition making it a better gateway to City Creek Canyon.  A stream buffer and wetlands could be quite important there to prevent or alleviate flooding in the future, e.g., heavy snow melt flooded State Street in 1983. The City is already undertaking some watershed restoration projects funded by Chevron as mitigation for an oil spill.  Hopefully, it won’t take such a negative event for City Creek Preserve to offer such assistance in order to increase its role as a biodiversity engine.

The boulders came from Brown’s Canyon quarry, a 100 year-old business near Park City.    Does that quarry have a biodiversity management plan (a BMP for quarries developed by World Wildlife Fund)? If not, what role should City Creek Preserve play in suggesting they start one?  Of course, such a suggestion would carry more weight before the stone was purchased.

The developers took their project through the pilot phase of LEED ND.  But did they consider Sustainable Sites, a system focused on measuring and rewarding a project that protects, restores and regenerates ecosystem services – benefits provided by natural ecosystems such as cleaning air and water, climate regulation and human health benefits.

I believe City Creek Center would score well in the “Human Health & Well-being” category.  But I’m still concerned about all of the water and power used in this engineered ecosystem. Tell us what you think below: Does City Creek Center pass muster as a biodiversity engine for Salt Lake City?  Why or why not?