I’m happy to announce that the Urban Greenspaces Institute will be the Fund’s fiscal sponsor. Go to https://www.urbangreenspaces.org/support-our-work  and put “Gretchen Fund” in the comment box.

Gretchen Kafoury, one of my heroine’s and neighbors here in downtown Portland, died Friday, March 13, 2015 at the age of 72.  Two weeks earlier she had testified before Portland City Council on the need to get more affordable housing into South Waterfront, part of an Urban Renewal Area that started while she was in office.  I, for one, expected many more years of her deep wisdom and boundless activism. 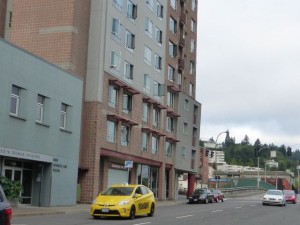 I propose to set up a memorial fund controlled by the Kafoury family or their designee. That fund would work with Portland Urban Forestry and its Bureaus of Transportation and Environmental Services and Home Forward to do the necessary infrastructure work to put in the street trees. 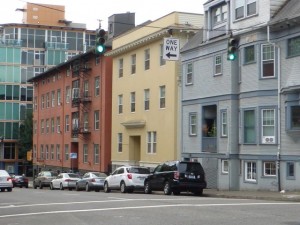 Depending upon the amount of money the fund is able to raise, it would move eastward on SW Columbia to install street trees in front of other buildings along the street that house low-income people.

Says Jeff Speck in  his book Walkable City:. . . Often the first item in the budget to be cut, street trees are key to pedestrian comfort and urban livablity in so many ways. In addition to offering shade, they reduce ambient temperatures in hot weather, absorb rainwater and tailpipe emissions, provide UV protection, and limit the effects of wind.  Trees also slow cars and improve the sense of enclosure by “necking down” the street space with their canopies. Speck points to a study of street trees in Portland that found that the presence of healthy street trees likely adds $15.3 million to annual property tax revenues–a 12 to 1 payoff on what Portland spends for tree planting and maintenance. 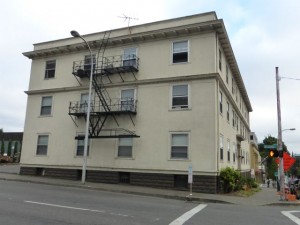 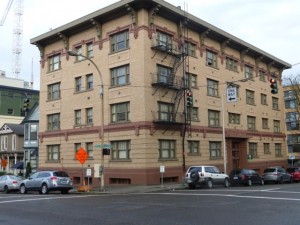 That data makes Portland sound progressive with regard to street trees, but these photos hardly make Portland seem like the  eco-city it advertizes to the world.  After all, these buildings are NOT in some recently annexed part of the city that has not been brought up to standards. Rather they are in the residential part of the oldest part of our city–DOWNTOWN.

SW Columbia and SW Jefferson are part of Portland’s move towards one-way couplets that, back in the 70s, turned downtown streets into car sewers for suburban commuters to  get to their jobs and back out again quickly.  Everything was done for the convenience of the suburban commuter.  Little thought was given to those who didn’t have the means to move out.

Now, the tide has turned and we need to narrow overly wide streets and widen too narrow sidewalks–AND PLANT TREES..  As more and more people are interested in living downtown, cranes are going up on many streets, closing all but one lane of streets that are two to three traffic lanes wide.  Somehow, commuters make do. For example, drivers leaving downtown are now getting by on one lane on SW Jefferson as lanes are closed for construction between SW 11th and SW 12th Avenues (and also on SW 12th)–making me think that we could re-configure this roadway and that of its couplet street SW Columbia to accommodate wider sidewalks, street trees, green street (bioretention) facilities and a bike lane.  Let’s make it happen!

While wider sidewalks with street trees on SW Columbia and Jefferson would be my ideal, I had to re-think my vision last week after talking with Andrew Haliburton, PE, at KPFF who generously donated his time to estimate costs based upon previous projects. Andrew said that to widen the sidewalk would likely cost on the order of $180,000–and that’s just for one side of the street!  (Do you ever wonder where the term “Highway Robbery” came from?)  So, in order to accomplish this project in the next year or so, the best option seems to be to install the trees on the current sidewalk. More recently, Cevero Gonzalez from PBOT told me that in order to widen the sidewalk, the City would have to move a water main and that would take millions.  We should all be asking why, when TriMet dug up the streets to put in bus pads a couple years ago, that didn’t trigger the water main move. It seems that its only needed for wider sidewalks!!! 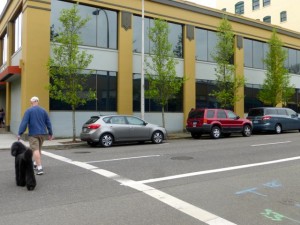 The Mexican Consulate at SW 12th & Jefferson added four street trees to the Jefferson St. side in late 2010. They make a great addition to the street!

The Mexican Consulate at SW 12th & Jefferson seems to have added trees on SW Jefferson in 2010 when it made other improvements to its property.  SW Jefferson has sidewalks of similar width as  SW Columbia in the blocks in question.  Already, the consulate’s trees are making a world of difference in both the pedestrian experience and the visitor/occupant experience.  I expect that the money for both the sidewalk removal and street tree–about $1,000 per tree according to Andrew–will be privately raised.

Addendum April 12, 2015 – After three intense weeks of work and some nail-biting, it looks like it is, in fact, possible to plant at least one tree in front of Gretchen Kafoury Commons on the SW Columbia side within the current narrow sidewalk.  First, I had to check with utility companies to assure that a tree would not interfere with their underground infrastructure.  Comcast (I think) and NW Natural painted their response on the street, Century Link emailed and Portland Water Bureau called.  I called Comcast specifically to verify with them as that was the utility line Portland Urban Forestry’s Rick Faber had mentioned as a potential problem.  And they verified good to go!

Rick Faber had already confirmed two spots in front of New Avenues for Youth, a non-profit next door to Gretchen Kafoury Commons.  I talked with Sean Suib, Executive Director there.  He said he is happy to seek the cooperation of his board.  And he expects to cooperate on the paperwork when the time comes.

Tomorrow I meet with Stephen Kafoury–hopefully about setting up the fund.  Then it will take some folks who are really great at social media and marketing to get word out there.  There certainly was an impressive turnout at the memorial service on April 4.  I’m hoping to reach everyone who came–and more.

April 13, 2015 – I’m happy to announce that the Urban Greenspaces Institute will be the Fund’s fiscal sponsor. Go to https://www.urbangreenspaces.org/support-our-work  and put “Gretchen Fund” in the comment box.  I also hope that you will join Gretchen Kafoury Memorial Street Trees on Facebook.

June 12, 2015 –  As a low-income business owner who has spent well over a month of pro bono work developing the Gretchen Kafoury Memorial Street Trees Fund with the encouragement of the Kafoury family, I was both delighted with the State of the County speech today at City Club Friday Forum and depressed that I was not able to get my effort to create this fund any attention. This would have been the perfect venue to raise the measly $3500 we need to plant trees in front of the low income housing in downtown Portland bearing Gretchen’s name.  I fault myself especially. Instead of asking permission, I should have used a Gretchen strategy:  Don’t bother with permission, just get up and make your announcement in the Q&A session before they can stop you!  You can ask forgiveness afterward.

PLEASE CONTRIBUTE to the fund to make a green buffer against the air and noise pollution from I-405. Residents of Gretchen Kafoury Commons also need the slower traffic and more pleasant walking experience that street trees bring.

July 14, 2015 – There are many more buildings housing low-income people downtown that need street trees.  I’ll post a few more, but feel free to post your own too.  Dowtown is everyone’s neighborhood!  Let’s make this into a tactical urbanism project and get something done. 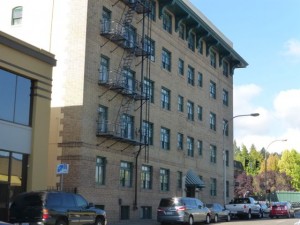 The Carmelita overlooks I-405 Freeway and the too wide Jefferson St. 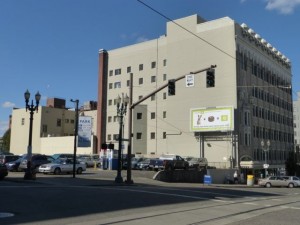 Chaucer Court and adjacent parking lot have no street trees. Many residents sit outside on SW 10th Ave. 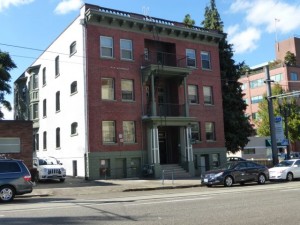 The Pinecone on SW 11th Ave. has no street trees though it does have some nice cedars on the north end of the building. 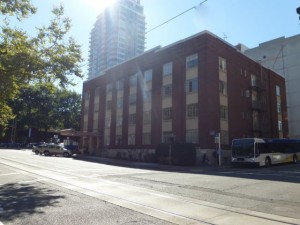 Ongford on SW 11th has no trees. 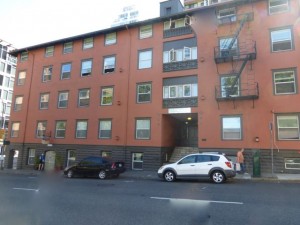 11th Ave Lofts on SW Columbia has no trees.