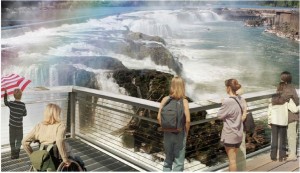 Oregon Metro has a Request For Proposals open for a Willamette Falls Riverwalk Schematic Design that has attracted attention from design firms around North America.  I must admit that I haven’t been attracted to the “riverwalk” concept as most of its purveyors ignore the need to restore any habitat.

But Willamette Falls is different.  Right at the start, prospective proposers are informed of four core values that this riverwalk partnership has established. And Healthy Habitat–riparian, shoreline and in stream–is one of them!

After trying for two weeks, I haven’t been able to get onto anybody’s team–and it’s getting to be so late in the process that my chances are waning.  I feel that with the right team, this project  could be a near perfect fit with the mission of PlanGreen.  It has creating multi-modal linkages (transit, foot, bike and car), public participation, habitat restoration, cultural and natural history interpretation–all rolled into it. 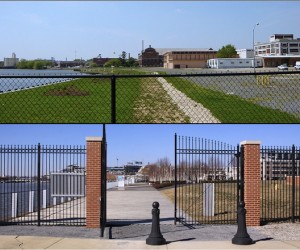 Before & after photos by JD. She says “The top photo shows the view into what was then the Southeast Federal Center in April 2004; the bottom photo, in February 2012, reflects how things have changed in eight years.” I’m no fan of turfgrass, but is this what we want our rivers to look like?

I was involved in the early stages of planning another “Riverwalk” –along the Anacostia River in Washington DC.  Jacqueline Dupree’s jdland web site provides some of the best photos of what is happening with it today.  Apparently 12 of its 20 miles is now built.  I must admit that it’s a bit painful, though not unexpected, for me to see the photos.  I feared having a trail that did little for most wildlife and little for pedestrians.  I feared a trail with too little habitat and too little shade.

I’m sure I sounded like a broken record in the early Anacostia Riverwalk planning process, but at every opportunity, I called for three things–all related:

Jaqueline’s photos show that I was not highly successful. However, one of The DC government’s web pages on the Riverwalk maintains:

Key design elements throughout the trail include the following:

So, maybe I got one out of three–if their rain gardens and bioswales are constructed using native plants.  With regard to their fourth design element, the only “natural environment” is in the Kenilworth Gardens portion of the trail–scheduled to be completed this spring.

I wanted–and still want–to see more ecological restoration along the rest of the trail where there is little natural environment.  I hope that the design team selected for the Willamette Falls Riverwalk will put the needs of Mother Earth over their need to make a design statement.

I hope that those involved with Willamette Falls will do so well with ecological restoration that they will inspire the people of Oregon City to rid their own trees and parks of English ivy, Himalayan blackberry, clematis, and myriad other invasive species that plague Oregon City and the Portland Metro region.  I hope they will restore healthy habitat.