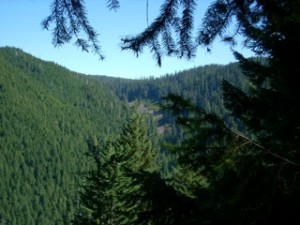 Our view into a vast forest of old-growth–an appropriate place to discuss Fundrise!

Sitting on a rock outcrop high above the Oneata Creek valley in the Columbia Gorge, I asked my eight hike participants[1] to suggest one piece of news in the past two weeks that they felt boded well for the environment.  After a pause, I said, “Okay, I’ll start: Yesterday’s Oregonian had a story on the Burnside Bridgehead project that mentioned a new way of funding commercial real estate.  Fundrise, a crowdfunding resource for the built environment, allows folks like you and me to invest in it–perhaps allowing us to better define what gets built in our neighborhoods.” 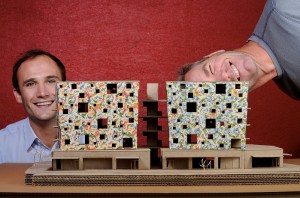 Guerrilla Development partners Andres Ochoa, left, and Kevin Cavenaugh pose with a model of The Dumbbell project. They are seeking investors through Fundrise, a crowdfunding website. (photo courtesy of Sam Tenney/ Daily Journal of Commerce)

Before I could go any further Peter, one of my participants, jumped in saying that he had just joined Guerilla Development ‘s Burnside Bridgehead project investor network yesterday.  He went on to say that what he had done was express an interest in investing a specific amount, rather than invest it, as the project was simply testing the waters right now.  He also expressed the opinion that local investments from Portlanders will allow far more creativity to thrive in our local buildings than Wall Street banks would likely allow.  He described Guerilla’s Dumbell project designed by Kevin Cavanaugh as two six-story mixed-use buildings, looking like they were covered in gift-wrap and connected by sky bridges–really imaginative, really Portland!

Like Peter, I’m really excited about Fundrise’ launch in Portland!  It seems that when I was writing my “Financing the Evolution of the Built Environment” blog a few years ago,  Dan and Ben Miller were on the other side of the country–in my hometown of Washington, DC–actually creating the vehicle that could make possible the return to local funding that I was writing about.

Using the Fundrise model could mean that the passionately involved neighborhood activists that we see in Portland–and throughout the nation–could use their energy actually funding projects that they would like to see, rather than fighting projects they oppose.  Combined with Portland’s local startup What Would You Like To See?, Fundrise really could become a vehicle to helping neighborhoods define what gets developed.

According to the Oregon Daily Journal of Commerce, Fundrise “makes money as a subscription-based service and through commissions.”  It takes care of what would otherwise be an immense amount of paperwork for a developer to pursue the SEC’s Regulation A route to seeking investment capital.

For The Dumbell, Guerrilla is attempting to raise up to $1.5 million in equity to leverage a loan for the balance of the $8.5 million project.  Guerrilla and Fundrise are soliciting investments from unqualified investors. To do that, they’ve registered the project with the state securities division. According to the Portland Business Journal, “The offering is limited to Oregon residents. The minimum investment is $100.”

Fundrise does not get us all the way there in financing the evolution of the built environment.  In order to give our young planning and urban design graduates and our minority and women business enterprises—and all those underemployed planners’, urban designers, architects, etc.–a chance at fulfilling careers in built 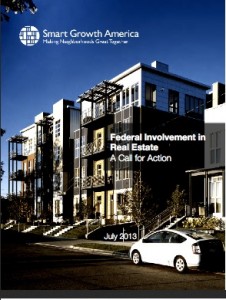 environment fields, we still need to press for many changes to the banking and investment systems at the federal level that I pointed out in my Part 1 article cialis no prescription.

We also need to support the recommendations for federal policy change in the Congress for the New Urbanism’s Live/Work/Walk: Removing Obstacles to Investment Initiative and the  Smart Growth America coalition’s  Federal Involvement in Real Estate: A Call for Action.

These recommendations could save the Federal government billions (hey Congress!)–while moving us towards more walkable and resilient neighborhoods. However, in an era of Congressional gridlock, Fundrise offers a tremendously important start–and HOPE!

[1] I lead trips for the Columbia Group Sierra Club focused on natural and cultural history and today’s environmental issues.