As I explained in Part 1 of Bringing the Wild Back to the City, I’m trying to take members of the built environment community to the wild to show them how nature does things in ways that are often more  efficient, elegant and pleasing to the eye than what we design.  Last week, I was presented with an opportunity to put this knowledge into action.  At a meeting on Portland’s NE Quadrant Plan last week, as I picked up the written comments of Audubon Society of Portland’s Conservation Director, Bob Sallinger, I was asked if I wanted to testify myself.  At first, I declined, but after reading Bob’s comments, I was inspired to expand upon them. 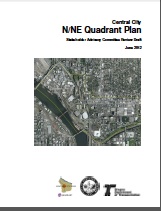 I’m testifying to endorse and expand upon the comments of Bob Sallinger (Audubon Society of Portland) on the SAC draft NE Quadrant Plan.  I have several relevant affiliations, but I’m testifying only on behalf of myself and my Woman Business Enterprise, PlanGreen.  I’m also an Audubon member who once played a role on its Conservation Committee.  My comments are all aimed at increasing the ecosystem services of our landscapes, letting nature help us create infrastructure that is sustainable, efficient and aesthetically appealing. What’s in black, bold italic are Sallinger’s points.  The rest is my expansion.

1. Protect undeveloped river banks and riparian buffers and add strong language to restore developed banks when redevelopment occurs.  When I was writing an article for Urban Land on Portland as a model for waterfront redevelopment, one of the most impressive tools I downloaded was the Willamette Riverbank Design Notebook (done by a team chaired by Mike Abbaté, now Director of Portland Parks). I was thrilled to see a city trying to make room for other species–even in its most urban and urbanizing areas. This is a mark of true wisdom.  Please reference and utilize this unique document during implementation phase.

2. Include specific targets for ecoroofs and other green infrastructure from the watershed plan.  To this I would add that to truly follow through on Portland’s world class Watershed Management Plan, any ecoroofs, bioswales, raingardens, green walls,, parks, etc., need to use the landscape to provide far greater ecosystem services than those extant today.  If we use NATIVE plant communities rather than the incipient invasive species, such as Nandina, that are so greatly overused in bioswales on Portland’s green streets today, we will provide habitat for the base of the food chain, our native insects.  Insects are so important, not only for all the jobs they do–like pollination and detritus decomposition–but as food for the birds that provide us with additional services in keeping a balanced urban ecosystem–in addition to the beauty and delight that they provide us.

3. Reference the tree targets in the Urban Forestry Plan.  Again, I believe that much more effort should be put to planting NATIVE trees.  If sidewalk uplift is a potential problem, then utilize a technology such as Deep Root that will prevent it. As a Tree Crew Leader for Friends of Trees, I always compliment a homeowner who has chosen a native tree.  Invariably, the other homeowners on my crew say “We would have chosen native too, if we had known.”  Recent Oregon Community Trees keynote speaker, Doug Tallamy, told the Chicago Tribune that while Portland is lush and beautiful, it is DEAD.  That’s because the overwhelming majority of our vegetation is non-native and the larvae of our native insects need native plants to complete their cycle into adults.

4.  Encourage bird-friendly building design utilizing the “Resource Guide for Bird–friendly Building Design” recently published by Audubon, along with the City and USFWS.

Thank you so much for your time.  And by the way, I want to say that as someone who lives downtown and walks and bikes nearly everywhere I go, I couldn’t disagree more with the last speaker (Terry Parker) who called for increasing auto capacity to the level that you increase the density.  That is definitely not needed and, in fact, counterproductive.
Sincerely,
Mary Vogel