I recently attended an Oregon Global Warming Commission event where its chair, Angus Duncan, made a relatively brief presentation on the commission’s Roadmap to 2020 explaining that in 2007, Oregon set a 2020 greenhouse gas reduction goal that is almost 30 percent below today’s levels (10 percent below 1990 levels).  In the breakout session, the

“Efficiency of Cities” table had two skeptics who were afraid that the state was proposing to curtail their choices and put everyone into large buildings in crowded cities.  (Duncan had suggested that New York City was a model for sustainability in terms of greenhouse gas emissions per person and it was this idea that they latched onto.)  I found myself wishing that I had brought along my copy of Oregon’s Cool Planning: A Handbook on Strategies to Slow Climate Change as the message in its images, captions and chapters might allay their fears—and even help them believe that their future might be more convenient and neighborly and less expensive in both time and money.  Healthier too!

Cool Planning is LEED-ND in plain English—especially the New Urbanist portion of it! While it is aimed at local elected officials, planning commissioners, planners, community organizations and developers, it is easily readable by anyone with a community college education.  Many of its examples are taken from Oregon cities other than Portland.  Since no other city in the state has a population greater than 160,000, it is useful in many parts of the nation, including small town America.

The central premise of the handbook: “If communities grow smart, VMT (Vehicle Miles Traveled, or the amount of driving we do) will decline, CO2 emissions will lessen, and we will help reduce climate change.”  The authors go on to state a message central to New Urbanists: “If we live in an area in which the places we want to go are at some distance and randomly scattered, we drive more.  If we live in well-centered, compact communities in which work, schools and shops are conveniently nearby and good transportation choices abound, we drive less.”

With chapters such as “Grow More Compact” and “Get Centered”, the handbook does not shy away from the density issue.  It does debunk myths about density and show its relationship to greater amenities.  “Mix Up Your Land Uses” and “Recycle Urban Land and Buildings” point to the fact that the smaller, well-connected blocks, higher densities, mixed land uses, narrower tree-lined streets w/sidewalks, pedestrian-friendly architecture and the compact development in central locations found in historic neighborhoods embody the design features that typically encourage walking. 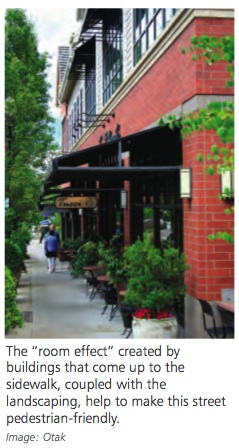 “Make Streets Complete”, “Make Way for Pedestrians”, “Make Your City Bike-Friendly for Everyone”, “Get Well-Connected”, “Put Parking in its Place” and “Make Way for Transit and Transit-Oriented Development” cover the transportation aspects of sustainable urban design.  Having just developed a presentation on the Neighborhood Planning and Design section of LEED-ND, I was overjoyed to see these chapters cover the same ideas and many of the same metrics in such an easily understandable way.  (Cool Planning’s lead author, Mitch Rohse, would be a great recruit to help re-write LEED-ND.)

“Find Better Models for Big Trip Generators” points out that school-related trips increase morning rush-hour traffic by as much as 30 percent, while big-box stores can generate as many as 10,000 car trips a day.  This chapter lists strategies for local governments to encourage climate-friendly school sitings as well as a more climate-friendly prototype for the big-box store—including identify vacant buildings suitable for large (multi-level) retail stores that are accessible by low-carbon transportation modes and encourage retailers to recycle older buildings downtown or in compact centers.

“Green Your Buildings” and “Plant Trees in Your Town” address some of the Green Infrastructure and Buildings credits in LEED-ND.  However, these chapters fail to address two of my favorite GIB credits—District Heating and Cooling and Vegetative Roofs. 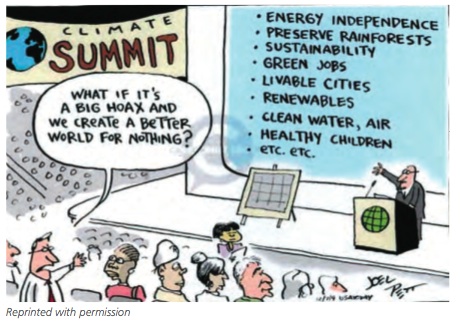 effectiveness.  It offers the caveat that climate action plans typically include several major sections such as building and energy, consumption and solid waste and local government operation.  Its own focus, however, is limited to greenhouse gas emissions affected by community design, land use and transportation.  A good climate action plan, it notes, will address all sources of greenhouse gas emissions.

A favorite passage from the handbook states:

It’s important to note that the strategies described here do not impose great burdens or call for great sacrifice. They are not bad-tasting medicine a community must reluctantly swallow to cure the problem of climate change. Quite the contrary: these strategies can yield multiple dividends. They not only can help to slow global warming but also can make your community more livable. Moreover, they can improve the everyday lives of people in the community by saving them money and time in their daily travels.

The handbook itself is well designed with sidebars, call-outs, images, resource lists and footnotes citing research to support statements.  If you don’t live in Oregon, insist that your state publish a similar handbook with local examples from its own communities.  But don’t delay until that’s done.  Download Oregon’s today and start using it.   If you are involved in a LEED-ND project (or hope to be), Cool Planning would make a great handout for policy-makers to warm them up to the idea of creating incentives for LEED-ND.