The unemployment rate for the “Architect, Engineer and Planner” professions in the Portland area has been estimated to be around 45% for the past two years.  During the last week of December 2010, your author visited three principals of smart growth/new urbanist firms in the Portland area that still have work to try to get insight into where those of us who are unemployed or underemployed might focus our energies.

John Fregonese recently made a presentation to the Oregon Climate Summit called The Co-Benefits of Climate Change: Discoveries in Practice highlighting some of the work his firm is doing to address climate change through planning and design.  Although the work he showed was in the Phoenix, Chicago and Southern California regions, he also mentioned that his firm was helping the state of Oregon with “Scenario Planning” guidelines required in SB 1059.

Some think of Fregonese Associates for its regional planning work such as Envision Utah and Louisiana Speaks, but the firm also does comprehensive plans, downtown plans and other small area plans such as waterfront plans and station area plans.  It has even done a code update or two.   FA’s services include public involvement, GIS analysis, financial analysis, and scenario planning as well.

John Fregonese’s office fronts on Portland’s Park Blocks—on the streetcar line just north of the Portland State University campus.  The few staff members who were still around during Christmas week included Office Manager Janet Fregonese, Vice President Scott Fregonese (John’s wife and son). At least nine of the 15 staff members (including principals) have degrees in planning or geography; one staff member is a landscape architect who doubles as an urban designer.

Fregonese Associates occasionally gets a contract with Metro where he served as Director of Planning from 1992-97.  His firm is on a team to do the much-coveted Civic Plan for Beaverton, OR, but most of its work is not in Oregon or even the Northwest.

Although FA does not call what it does charrettes, it makes heavy use of highly participatory workshops to capture the community’s best ideas through simulated decision-making activities and visualizations.  New development included in its visualizations are based on extensive analysis about what is feasible in that particular area, using FA’s suite of planning tools, Envision Tomorrow. The firm also offers client communities’ staff training in utilizing its Envision Tomorrow software so that the community can do some of the above services for itself.

Envision Tomorrow is a set of planning tools that models the development of buildings on different scales from the site level to broader land use scenarios.  It will soon be in the public domain through an agreement with Envision Utah. 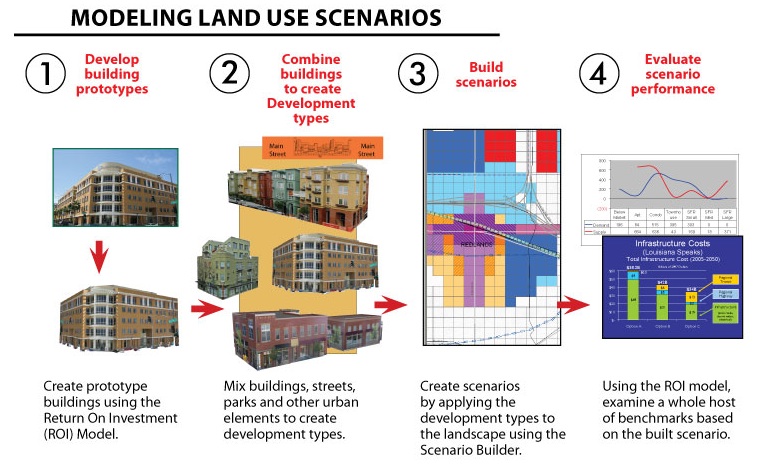 In 2011, Fregonese Associates is leading a team of experts to create a manual for best coastal development practices in south Louisiana and it expects to finish the East Baton Rouge Plan, do further work with Chicago Homes for a Changing Region and Envision Utah and continue its recently begun work with Imagine Greater Tuscon.  Locally, they will continue work on the McLoughlin area plan for Clackamas County and the Beaverton Civic Plan—and this list is only a sampling!

According to Fregonese, the ability to communicate planning ideas to the general public rather than just to each other is the most important skill a planner entering the field must possess. “We’re outsiders wherever we go, so public involvement is really critical as they’re the real experts about their communities,” he maintains.

Job seekers should also have some technical specialty such as GIS, 3-D modeling, finance, economics, urban design or form-based coding.

A first glance at their website makes you think you’ve encountered a fairly conventional architecture firm that largely serves the private sector—the kind of firm that went away when the bubble burst.  You’d only be partly right!  Myhre Group Architects shrank from around 135 to only 35 professionals today, but it has survived.

Bob Boileau figures MGA has survived because of the market niches they have hung onto: mixed-use, multi-family residential, commercial, and hospitality.  It’s also the fact that they have pursued mid-rise housing of 5 – 7 stories rather than high-rise that has kept them going.  “Our firm is really about preserving the Urban Growth Boundary and developing centers and corridors,” said Boileau.  “We have an unwritten on-call contract with Metro.”

Boileau likes keeping most of his work in the Northwest, but not necessarily in Portland.  “The City of Portland has long been difficult because of the time uncertainty associated with the development process and, because of that, development in Portland will probably be slower than most areas to recover,” maintains Boileau.  “Portland’s various bureaus dealing with development work in silos, often at cross purposes with one another;  Hillsboro and Gresham are taking housing opportunities away from Portland because their planners will all sit down together and work with you; they are more willing to be flexible on regulations,” he said.

One of Boileau’s recently completed design projects, The Prescott, is in Portland and recently got the go ahead to move forward after being stalled by financial issues for a long time.  This TOD will have 155 apartments and a restaurant, coffee shop and other active pedestrian retail.  At the corner of N. Interstate and Prescott, it occupies one corner of the Prescott Station (light-rail). 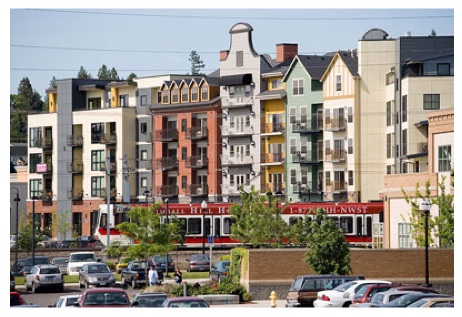 The Crossings at Gresham Station by Myhre Group Architects

Boileau has been involved in some of the signature new urbanist developments in Oregon including: Orenco Station, Villebois, Northwest Crossings, South Waterfront and Central Bethany.  The firm has also designed some significant infill projects that have enlivened regional and town centers in the Portland Region 2040 Plan:  North Main in Milwaukie; the Crossings at Gresham Station and Multnomah Village Lofts in Portland.

In 2011, MGA is currently working with the City of Lake Oswego with its “Main Street” along 1st Street. This project includes relocating its Main Library as a catalyst for a mixed-use redevelopment that includes, retail, housing and commercial.

Just like Fregonese, Boileau feels that it is critical for architects and planners to understand the business side: “They need to know the art of the deal.”  MGA has worked on projects recently where part of its task was to find the money.  He offered: “Economics is the third leg of the sustainability stool. Understanding sustainable design and how it affects the economics, project delivery and politics is becoming increasingly important.  Sustainability is our state religion with many separate beliefs in it.  The planner’s job is to have a very good understanding of all the different groups and speak to them in their language.”

From a visit to its headquarters office location on the fringes of suburban Lake Oswego ringed with a surface parking lot, one might not peg Otak, Inc. as a new urbanist firm, albeit the building was recycled.  Although its web byline calls it an “Architecture firm specializing in transportation, growth management, and urban design,” the author had long thought of Otak as an engineering firm  that branched out.  But Otak has been developing its reputation in new urbanist planning for a number of years by planning for greenfield areas within the Portland region’s Urban Growth Boundary. Dills pointed out that it has also been involved in planning Portland’s Pearl District, the Portland Streetcar and downtown housing and infrastructure projects.

In December 2010, Dills had just finished the West Bull Mountain Concept Plan for a 700-acre new neighborhood as well as the North Bethany Concept Plan and implementation—both for Washington County, Oregon.  The Comprehensive Plan for the new Clackamas County City of Damascus, which Dills was involved in, was adopted this fall.  Dills mentioned that they had recently finished a “place-based code” for Logan, Utah, a smart growth code that incorporates form-based standards with new design guidelines and the existing code.

Dills seemed most excited about work Otak is doing for the United Arab Emirates Western Region of Abu Dhabi—Al Gharbia.  The firm will help to greatly expand Mirfa, Liwa, and Ruwais from small towns into sustainable cities.  He just finished a ground-breaking, context-sensitive Street Design Manual that takes many cues from the ITE-CNU Manual Designing Walkable Urban Thoroughfares: A Context Sensitive Approach. In 2011, Dills is looking forward to putting it into practice in the design of 4th Street (aka Muroor St.) in Abu Dhabi over the next year.

Also in the works for Otak in 2011 is a plan for the conversion of a former industrial area in McMinnville, OR to a mixed-use neighborhood and the West Silverton Master Plan for Silverton, OR. “We are seeing a few private developments just starting, but the market is still very weak and developers are cautious,” said Dills

As far as where things are trending, “Planning is still enduring and leading the way,” maintains Dills, “along with sustainable principles and green technology.”  But, he admits that the implementation part is probably where most action needs to take place in order to bring in new and diverse housing types and transform centers and corridors.  “It’s the 82nd Avenues and the Barbur Boulevards [both largely 50s era strip commercial areas of Portland that are also state highways] that have opportunity for great change.  But there are tremendous challenges to get areas to redevelop in this period when development loans are hard to come by, and public investments must compete among so many priorities.

Of course all three firms look for DBE/MBE/WBEs when they have to in order to meet federal or local requirements.  Sometimes that is a long-established firm with whom they have “always” worked.  However, the author was assured that there is opportunity for others as well.  Please share below if you are one of those small firms that have gotten a foot in the door by partnering with established firms.  Let’s help each other through what still feels like a crash as much as possible.